The multi-period site of Benbow House lies next to the Thames, and is a fine example of the multifarious and colourful activities that took place in London over the centuries. The earliest extant evidence of human activity within the excavation area was an attempt at land consolidation in the 12th or 13th century. This was followed by three periods of building from the 13th century onwards. Nine or ten buildings can be dated to the 13th and 14th centuries, and probably included the remains of stews - inns or brothels known from documentary sources. Further buildings were constructed in the 16th and 17th centuries, including a possible animal-baiting arena. The final phase of the excavated evidence included the remains of 18th- and 19th-century brick buildings reflecting the later use of the site as a foundry and metalworks.

"This report is therefore a significant archaeological study of the social and industrial development of Southwark … It is heartening to see such projects published so promptly: the MoLAS archaeological Studies Series sets a standard that the other London-based units must strive to emulate." London Archaeologist 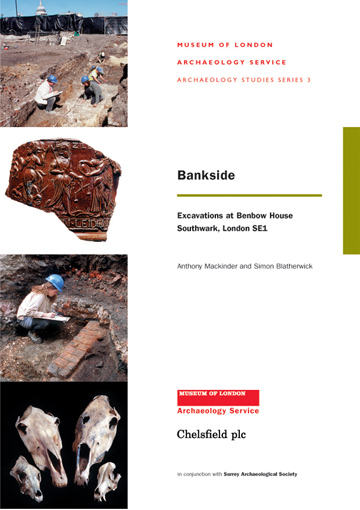