A bioarchaeological study of medieval burials on the site of St Mary Spital: excavations at Spitalfields Market, London E1, 1991–2007

Major excavations on the site of the Augustinian priory and hospital of St Mary Spital uncovered the remains of over 10,500 human skeletons. Unprecedented accuracy of dating and phasing of the cemetery was achieved using a targeted programme of stratigraphic and radiocarbon dating techniques, resulting in four chronological periods of burials. Osteological analysis of a sample of 5387 skeletons has provided a unique insight into the lives of medieval Londoners from the 12th to the early 16th centuries. Many of the skeletons showed evidence of disease and injury and the results of this major project are integrated into a biocultural framework, which includes the recurrent famines and epidemics of the time.

Lasting impressions after reading this book are the sheer scale of the project and the first rate, innovative work arising out of it, in particular, with regard to phasing and digital recording. Connell et al’s volume has been eagerly anticipated and it does not disappoint.
Louise Loe in Antiquity 2013

Overall, Connell and colleagues advance bioarchaeological research and skeletal analysis. The monograph is well-written and provides a synthesis of the largest urban cemetery skeletal collection in Britain.  Scholars and researchers will appreciate the breadth and depth of reporting, while dilettantes in medieval studies will revel in the well-told story of St Mary Spital and the Augustinian priory and hospital of London.
Joseph T. Hefner in Historical Archaeology (USA) 2013

Written by four human-bone specialists, the book successfully tackles the skeletal evidence directly, while accompanying photographs and summaries make it more accessible to the general reader. … Attractively presented, this is a delight for the enthusiast.
Emma Watts-Plumpkin in Current Archaeology 2013

This volume is an excellent addition to the MOLA Monograph Series. Overall, Connell and associates have produced a wonderful and affordable volume. The book is a valuable resource for osteologists and bioarchaeologists but also provides a thoroughly fascinating account for any reader with a myriad of interests.
Diana Mahoney Swales in Archaeological Journal 2013

This book provides a major contribution to the study of medieval hospitals and their communities. Work at St Mary Spital therefore presents a relatively comprehensive yet unique opportunity to provide insights into the health and pathology of the city’s ever-changing population, as well as archaeological evidence of health, disease and injury and the human effects of medieval urban society and environment.
Simon Roffey in Medieval Archaeology 2013

Overall this volume reports on a remarkable achievement and represents an important addition to the academic literature, providing rich evidence that no historian of medieval Britain can afford to ignore.
Chris Galley in Local Population Studies 2013 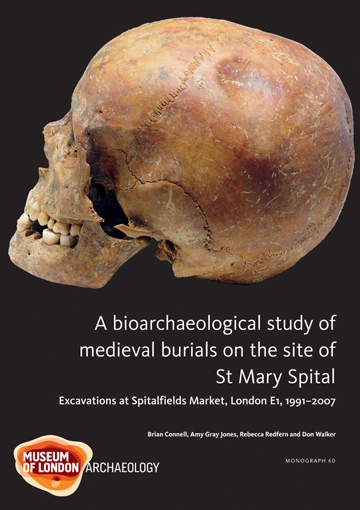