The East Smithfield Black Death cemetery was excavated in 1986–8 as part of the Royal Mint site. Founded in 1348/9, it was one of two emergency burial grounds established when the Black Death plague came to London. This report presents the results from the only large-scale excavation and post-excavation analysis of a proven Black Death cemetery in this country and is indisputably of international importance in terms of its archaeology and the human bone assemblage derived from the c 759 burials found. The burial practices and the cemetery population are analysed and discussed in relation to Black Death studies in London and elsewhere.

"…The report provides an admirably clear-headed assessment of how its estimate of the numbers buried might or might not contribute towards answering the difficult question of the size of London’s population on the eve of the epidemic. Above all this report adds to a narrative of the experience of the Black Death in London, notably through its insights it offers into the practice of burial during one the most traumatic episode of crisis mortality in the city’s history. It throws light on the political economy of the response and on London’s capacity to survive through a period of severe disruption, as is also indicated by continuity in the city’s administrative procedures and record keeping. It may be, too, that the obvious concern for regularity in the cemetery indicates that this special place of burial had a symbolic significance as a necessary assurance that that the living would continue to care for the dead and their ordered passage into the next world."
Derek Keene in Transactions of the London and Middlesex Archaeological Society 2008

"This short yet elegant monograph reports on the archaeological evidence for what was probably the contingency response of Edward III himself: the acquisition of the two areas for mass burials in East and West Smithfield…. Internationally important."
Paul Stamper in British Archaeology 2009

"…The supporting illustrations are all of high quality. This monograph will be a very useful addition to the ‘Black Death’ literature for both bioarchaeologists and medical historians…"
Charlotte Roberts in Medieval Archaeology 2009

"It helps to bring to life those harrowing events of 660 years ago in a vivid way, and is definitely worth the read."
Piers Mitchell in International Journal of Osteoarchaeology 2011 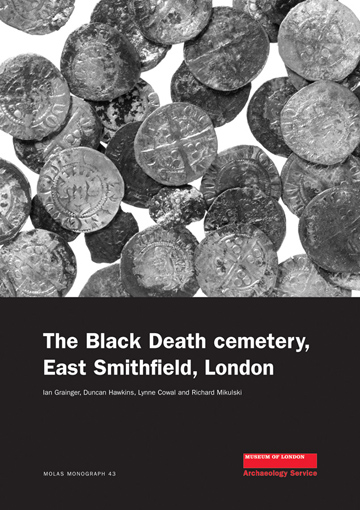