Burial at the site of the parish church of St Benet Sherehog before and after the Great Fire: excavations at 1 Poultry, City of London

Archaeological work at 1 Poultry includes analysis of 280 burials associated with the medieval church of St Benet Sherehog and a post-Great Fire burial ground on the same location. Post-medieval coffins and coffin furniture indicate that the burial population is primarily late, with a fifth dated to before the Great Fire, although none were associated with the primary phase of the church. The pre- and post-Fire parish is considered in terms of the documented population, occupations and wealth, and health and mortality. Evidence for the medieval church also includes discussion of religious life in the parish. 'Death and commemoration' looks at historical and archaeological evidence for funerals and burial practices. A detailed osteological account of the 17th- to 19th-century burial sample includes comparison with contemporary London cemetery populations.

A full digital resource of samples excavated at 1 Poultry and vicinity, City of London is available for researchers via Archaeology Data Service.

"For any LPS reader with an interest in how archaeology can illuminate social and economic life in the early modern period, this volume is highly recommended. It is well illustrated and is particularly good at placing various archaeological finds into an appropriate documentary and historical context."
Chris Galley in Local Population Studies 2009

"…the analysis of the parish is part of the enormous benefit of this monograph. Clear maps and full referencing and an excellent index allow the reader a much better idea of what was happening in the central part of the City, including the names in households in the parish in 1695. This publication is an excellent value for money exposition of the findings of this particular site under Number One Poultry, especially bearing in mind it is in hardback format. I recommend wholeheartedly."
Paul Simmons Newsletter of the Friends of the City Churches 2009

"This monograph on the archaeology of 1 Poultry, City of London, provides a very useful window on the lives of a late- and post-medieval London parish, with comparisons drawn with other London sites and populations."
Charlotte Roberts in Medieval Archaeology 2009

"The Sherehog report by Adrian Miles and Bill White … is the finest such treatise I have ever read … more so as Miles adheres to the original terminology for the coffin-furniture. In Miles and White one has a combination as prefect as that of Gilbert and Sullivan."
Julian Litten in Transactions of the London and Middlesex Archaeological Society 2008

"… Post-medieval cemeteries present a rich data set that combines history, archaeology and osteology. This is eloquently demonstrated in this book …This is clearly set out monograph that is well illustrated and researched. It will appeal to all those with an interest in genealogy, social history, archaeology and health."
Louise Loe in Journal of Archaeological Science 2009 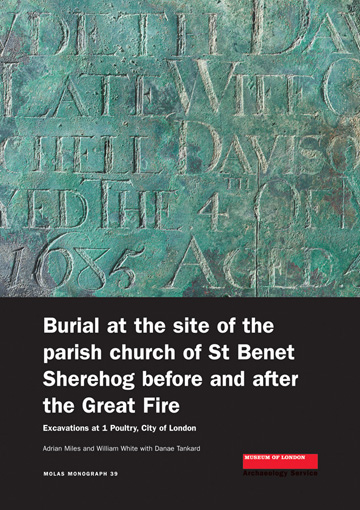