A major conservation programme took place between 1998 and 2003 on one of Europe’s greatest medieval painted wooden ceilings. Investigation and analysis were an integral part of this conservation work in the former Benedictine abbey church of Peterborough. The knowledge gained and the discoveries made during that time, as well as the conservation programme itself, are documented and fully illustrated here. Not just the marvellous nave ceiling, but the medieval roof structure that supported it and the transept wooden ceilings that preceded it feature in a story that spans the period from the mid 12th century into the 21st and saw many significant post-medieval interventions. Documentary history and iconography are freshly examined; structural and scientific studies (including tree-ring dating, paint analysis and environmental monitoring) afford new understanding of both the original works and later repairs.

The documentary and photographic archive of the Peterborough Cathedral nave ceiling conservation project is available online.

An overview of the investigation and conservation of the 13th-century nave ceiling of Peterborough Cathedral by Jackie Hall and Susan M Wright (in English) is free online as part of Plafonds peints médiévaux en Europe (2019).

MOLA and the editors are to be commended for their patience and good sense in bringing [this material] together and producing such a high-quality volume.
John McNeill in The Antiquaries Journal 2016 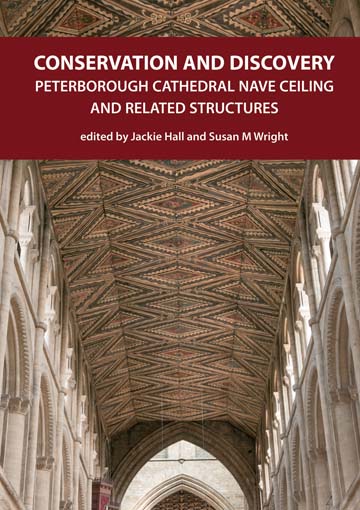