In Roman London, the dead were buried beyond the limits of the settlement, and soon after the town was established cemeteries developed to the west, north and east of the settlement. From the late 1st to the early 5th century AD an extensive area east of the modern City of London was used as the place of burial for a significant part of the local population. Following a major campaign of excavation and research, the Museum of London Archaeology Service, in collaboration with English Heritage, has produced this volume describing the eastern cemetery of Roman London.

This is the first large study of the people of Roman London using data from modern cemetery excavations. The volume follows the synthetic approach of earlier MoLAS monographs to integrate all strands of the evidence relating to the 550 inhumation and 136 cremation burials, pyre deposits and associated remains into a single report which is designed to be more accessible than traditional cemetery publications. Thematic essays address topics such as the layout and development of the cemetery, the funeral pyre, burial practice and the dead. The fully illustrated catalogue includes burial goods (from hobnailed boots to complete glass vessels and elaborate jewellery), objects placed on the pyre (including items rare or unique in Britain) and ceramic cremations urns. Current research objectives and problems inherent in the excavation and interpretation of cemetery material are discussed..

A full digital resource of samples excavated at the eastern cemetery of Roman London is available for researchers via Archaeology Data Service.

"...is a fine account of successive excavations presented in the (comparatively) accessible style that a few units are now evolving for major pieces of work. The report covers 136 cremations and 550 inhumations, with evidence for varied and cosmopolitan rites, plus funerary structures and occasional inscriptions. Highlights include identification of a bustum burial, with exceptional evidence for the personal items and food within the cremation ceremony. Jackie McKinley's discussion of the evidence for pyre technology and crucial evidence for (sometimes quite exotic) plant remains is essential reading for those dealing with cremations of any period … What is really impressive is the clarity and sheer interest of the whole report. It's a real pleasure to have so much colour in a report of this kind."
Review in The Archaeologist Spring 2003

"This book is a fascinating read for anyone interested in archaeology or intrigued by London’s long and complex history. It is clear from the beginning that the authors intended the book to be accessible to a wide-ranging audience. As a result, it is sumptuous and detailed but also easy to read. It is characterised by clarity of layout, structure and terminology."
Kate Meheux in London Archaeologist Winter 2000 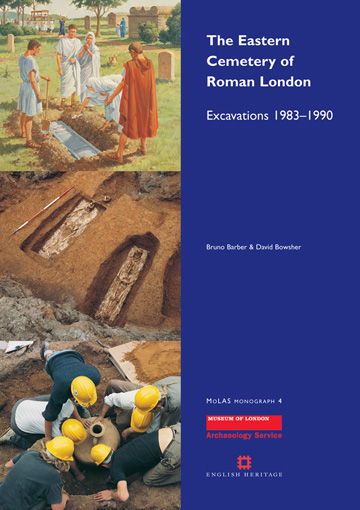