Glass working on the margins of Roman London: excavations at 35 Basinghall Street, City of London, 2005

New insights into the workings of Londinium’s glass industry and its craftsmen in the later 2nd century AD come from the analysis of over 70kg of broken vessel glass and production waste from a pit in a marginal area in the north-west of the Roman city, in the upper Walbrook valley. Two probably associated mid 2nd-century buildings were found but not the workshop itself. The glass used originated in the eastern Mediterranean, some arriving as raw glass but supplemented by locally-collected cullet. The waste material found provided evidence for the whole process from the preparation of raw materials to blowing and finishing of vessels.

The book is a truly disciplinary effort ... The authors aimed to place the Basinghall material in the wider context of glass working in the western empire, with close attention to the organisation of the industry, but also to shed light on glass consumption in Roman London and Britain. All these aims are achieved with aplomb. ...
The text is scholarly, rigorous and easy to follow ... This investigation represents what is arguably the most detailed analytical investigation of a Roman glass workshop to date.
Thomas J Derrick in Britannia 2017 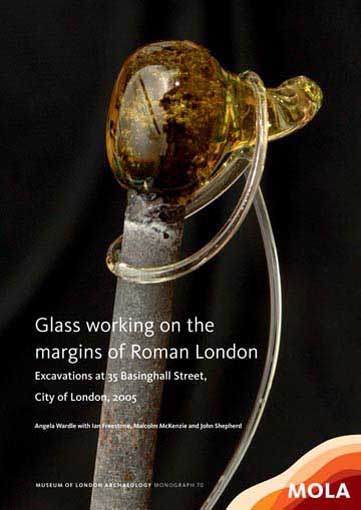