Great houses, moats and mills on the south bank of the Thames: medieval and Tudor Southwark and Rotherhithe

Regeneration in the 1980s–90s on the south bank of the Thames resulted in archaeological and historical investigations at Platform Wharf, Rotherhithe, and next to London Bridge, in Southwark. The first was the site of a house acquired by 1349 by Edward III and rebuilt by him in 1353–61; the second contained tidal mills on the waterfront and three notable residences during the medieval period – the 14th-century Dunley’s moated house and Edward II’s Rosary, and the 15th-century Fastolf Place. Both sites were subsequently built over with small properties. Moat infills produced exceptionally rich assemblages of domestic artefacts and ceramics; the waterside location preserved a wide variety of plants, timber structures and woodworking evidence.

"…the story emerging from these collated backlog reports, of a riverside where great houses stood alongside tidal mills, docks and wharves, advances our understanding of London’s south bank."
Paul Stamper in British Archaeology 2009

"Another excellent volume in the MOLA series….the presentation is excellent, combing a readable text, good line drawings and photographs. Such volumes are, of course, the product of team effort and all authors are to be congratulated."
Mike McCarthy in Medieval Archaeology 2010

"… the excavations uncovered extensive and fascinating evidence about the watery landscape of the Thames riverfront, including unusual details about the medieval and Tudor carpentry and joinery skills employed in an impressive variety of waterfront structures. Especially notable is the detailed discussion of the tidal mills, moats, and docks that will be of particular interest to historians of technology and environmental historians. The great moated houses built by such well-known figures as Edward II, Edward III, and Fastolf will also draw the attention of scholars interested in the material culture of the affluent and powerful people of the period."
Maryanne Kowaleski in Medieval Review 2011 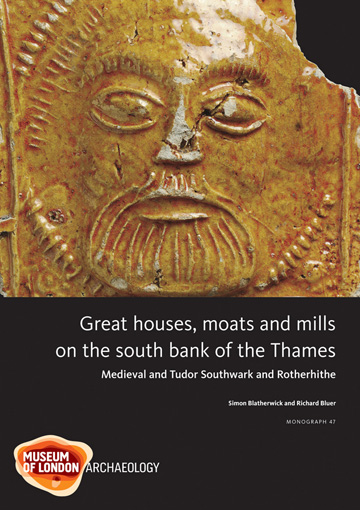