Holywell Priory and the development of Shoreditch to c 1600: archaeology from the London Overground East London Line

The upgrade and extension of the East London Line created an opportunity for archaeologists to discover more about Shoreditch. Archaeological investigations followed the proposed route and this volume examines the landscapes concealed beneath modern-day Shoreditch. Roman burials were discovered here, close to Ermine Street. The area was transformed in the 1150s by the foundation of Augustinian Holywell Priory, west of what is now Shoreditch High Street. Holywell was the ninth richest nunnery in England at the Dissolution. Sir Thomas Lovell established a residence within its precinct and was buried in the priory church in 1524; other mansions were constructed to the east. Properties associated with the former religious precincts defined the early London suburbs.

"Copiously and elegantly illustrated, this is a good addition to the study of the monastic landscape of medieval London and its surroundings…"
Deidre O’Sullivan in Medieval Archaeology 2012

"What is compelling  about the volume is its presentation of a narrative from prehistory until just after the Dissolution, which weaves the majority of the specialist information inot its structure…It is splendidly illustrated throughout, as one has come to expect from MOLA monograph series, and is reasonably priced for an attractive hardback."
Michael Shapland in Church Archaeology 2012 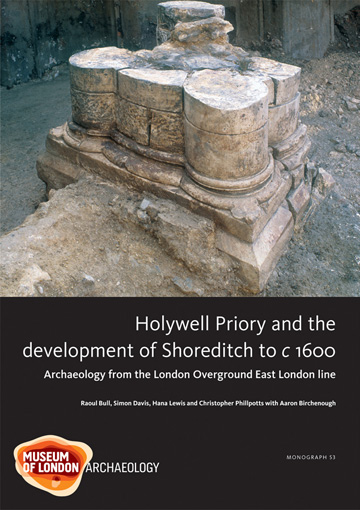