The archaeological work at Pacific Wharf, Rotherhithe, has provided a fascinating insight into the rich maritime heritage of the Thames waterfront. The land was occupied in the 17th century, by first a timber yard and then a commercial wharf. Shipbuilding arrived in the 18th century, and in the early 19th century the Beatson family began a ship breaker’s yard. Pacific Wharf was the final resting place of the Temeraire, a veteran of the battle of Trafalgar and immortalised by Turner as The Fighting Temeraire being towed up river to its demise. The findings include important evidence of woodworking techniques and shipbuilding technology.

"MoLAS studies nos 10 and 11 (Roman burials, medieval tenements and suburban growth by Dan Swift, and Investigating the maritime history of Rotherhithe: excavations at Pacific Wharf, 165 Rotherhithe Street, Southwark by Kieron Heard with Damian Goodburn) in their series demonstrate the confidence derived from their editorial and production experience. Integration of the different contributions has been well thought through, and systematically presented, graphics and layout are well designed, to a format familiar to their readership."
Review in Transactions of the London and Middlesex Archaeological Society 2005

"… this report is to be recommended as an important contribution to the understanding and the study of post-medieval waterfront and shipbuilding techniques."
Christian Lemée in Nautical Archaeology 2005

"In the body of this well-written and lucid book the archaeological, cartographic, documentary and geological evidence is easily understood, and there are a number of useful diagrams, maps and photographs to interest the reader … In this study, the authors have ably demonstrated a part of Rotherhithe’s rich maritime history."
Hugh Murphy in Journal of Maritime Research 2004 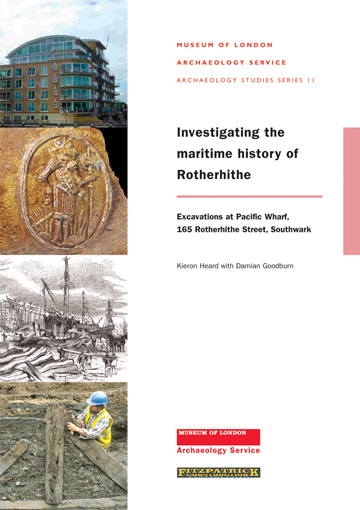