London exists today because almost 2000 years ago the Romans realised it was the lowest convenient point where the Thames estuary could be bridged. The main phase of the Roman bridge apparently went out of use during the 4th century AD. The Thames was not bridged again until c 1000, when the first of a series of timber bridges was erected, initially to prevent Viking raiders sailing upstream. The great stone bridge lined with houses was constructed c 1176–1209. Twice, in 1281–2 and 1437, parts of the stone bridge were broken down by a combination of ice and neglect. It was demolished in 1831–2 after the construction of a new bridge upstream. This volume is based on the 1984 investigation of the Southwark medieval bridge abutment and combines the archaeological, architectural, historical and pictorial evidence for London's greatest bridge. The scene of battles and pageants, London Bridge was also where the 'keep left' on the road rule began in 1722.

"This fine volume is really just an excavation report for the very difficult excavations, undertaken in 1983-4, on the Fennings and Toppings Wharf sites on the Southwark riverfront just to the east of the modern London Bridge abutment. It is also, however, much more than that, as its title suggests, and the volume has now become the definitive account of the archaeology and history of the most important bridge in London. It is, therefore, a worthy successor of Gordon Hume’s fine book, Old London Bridge (1931), published exactly 70 years earlier. As Professor Nicholas Brooks, the historian of Rochester bridge, writes in his forward ‘We are presented here with a new wonderfully researched and fully integrated interpretation’. The Museum of London Archaeology Service must be congratulated on publishing an exceptional volume, which at only £22.00 is a bargain. The volume draws together all the evidence chronologically in 14 sections, the final one being a series of specialist appendices, which range from dendrochr
onology and finds reports to a brief interpretation of the evidence for the bridge in the Norwegian Olaf sagas."
Tim Tatton-Brown in Medieval Archaeology 2002

"If you have an interest in London Bridge, or in bridges in general, this is essential reading."
Clive Orton in London Archaeologist 2002 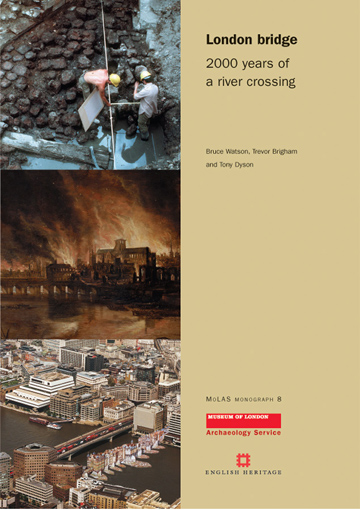