The medieval priory and hospital of St Mary Spital and the Bishopsgate suburb: excavations at Spitalfields Market, London E1, 1991–2007

Spitalfields Market was the the site of the Augustinian priory and hospital of St Mary without Bishopsgate, later known as St Mary Spital. Large areas of the medieval precinct have been explored, making this by far the most intensively investigated medieval hospital – and one of the most extensively investigated monastic establishments – in Britain. Exceptional discoveries included a pre-existing extramural and extraparochial cemetery that became the priory’s principal cemetery; remarkable evidence from the canons’ infirmary with its attached pharmacy; the charnel crypt of the 14th-century cemetery chapel, which survived and is preserved today under Bishops Square; and the secular hamlet of timber houses and workshops that grew around the cemetery in the 14th and 15th centuries. 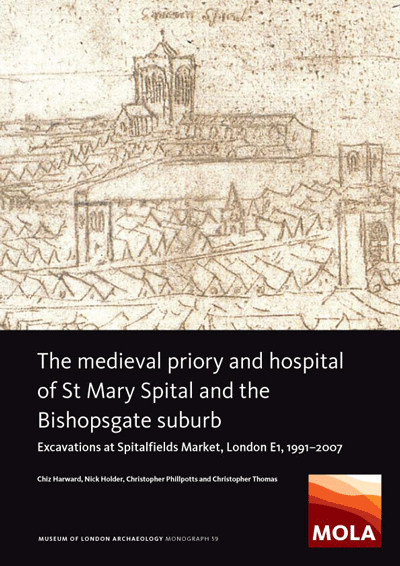