The development of this London suburb from the medieval period to the early 20th century is illustrated by excavations on the site of St Giles Court. Houses were first built along the High Street in the mid 16th century and 100 years later St Giles was at the heart of London suburban expansion and relatively prosperous. By the late 18th century the reputation of the St Giles area and its housing had declined. The site lay within the southern core of the area known as the ‘Rookery’ – a notorious late 18th- and 19th-century slum but from the archaeological evidence an area of contrasting lifestyles, households and businesses.

"… in this case integration has been done with intelligence and due respect to the specialist reports and is highly successful. It is a fine addition to the report series the Museum of London Archaeology (MOLA), one of the highlights of British archaeology over the last decade."
Paul Courtney in Historical Archaeology (US) 2013

"The book is an engaging introduction into the disparity between the archaeological and historical evidence prompting questions about past London’s urban life and the true nature of slums all over the capital."
Ed Johnson in LAMAS Newsletter 2013

"The concluding essay, drawing the threads together, is a masterly account of the causes and consequences of abject poverty, and of a London thankfully long swept away."
Paul Stamper in British Archaeology 2011

"For urban historians, and particularly those with an interest in the history and development of the English inn, this report of excavations in the neighbourhood of St Giles-in-the-Field Church in central London will be of extraordinary interest. This report reveals just how much archaeology can add to the local historian’s repertoire. These are many other important facets to this report, which is highly readable and highly recommended, which include an explanation how the area involved became known as a ‘rookery’, in other words one of the early areas of very high density population, ultimately to be described as slums."
Trevor James in Local History Magazine 2011

"The story deduced from documents and maps remains broadly accurate, but the fragmentary archaeological evidence has been teased out to add intriguing detail and intricacy."
Bridget Cherry in London Topographical Society Newsletter 2014 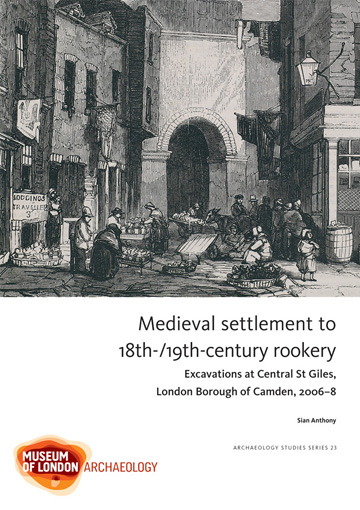