Documentary sources suggest that from c 1821–53 up to 33,000 burials may have taken place in the commercial Nonconformist burial ground at New Bunhill Fields, Southwark. Excavation of 827 wooden coffin burials in 2008 allows comparisons of the use of the burial ground, coffin furniture and burial finds with other contemporary cemeteries. Of particular interest is the good level of preservation of floral remains in a child’s coffin, ceramic plates in a woman’s coffin and good examples of burial clothing. The 514 skeletons selected for full osteological analysis, demonstrating a broad spectrum of disease conditions, provide a wealth of information about life and death in this area of 19th-century London.

"The social context is well explored and the production is exemplary, the price is commendable too. Thanks largely to MOLA, what the city can now surpass London in terms of understanding its skeletal population?"
Roger Bawdler in British Archaeology 2013

"This monograph makes an important contribution to the growing literature on London’s nineteenth-century burial archaeology. The authors, and what is now MOLA, should be congratulated on its production."
Harold Mytum in Archaeological Journal 2013

"… the New Bunhill Fields volume is perhaps the more accessible of the publications to the general reader yet still offers much of interest to the specialist."
Annia Cherryson in Post Medieval Archaeology 2013

"…this section of the report is an essay on how coffin-furniture should be recorded and, yet again, shows Adrian Miles to be the master of the craft."
Julian Litten in Transactions of London and Middlesex Archaeology Society 2012 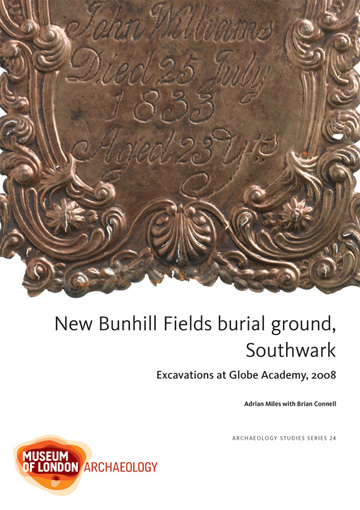