Outside Roman London: roadside burials by the Walbrook stream

Excavations at Crossrail’s Broadgate ticket hall at Liverpool Street provided archaeological evidence for an area outside Roman London’s northern defences, a landscape dominated by a former tributary of the Walbrook stream. Drainage features were succeeded by an early 2nd- to 3rd-century AD road running west from Ermine Street towards the fort in the north-west corner of the town. To the south of the road, seven 2nd-century AD inhumation burials, including three decapitations, and one cremation burial formed part of a burial ground in this waterlogged area, where evidence of flooding suggested an explanation for the accompanying disarticulated human bone.

This book is one of two exploring the archaeological research for Crossrail at Liverpool Street. Explore the site's findings further in The New Churchyard: from Moorfields marsh to Bethlem burial ground, Brokers Row and Liverpool Street. The Crossrail archive for Liverpool Street is available online, as is The Roman small finds, glass and leather (Michael Marshall 2018).

‘Outside Roman London is an excellent piece of analysis and I would certainly recommend it. This large and complex excavation took place in 2015, with analysis and publication completed in just two years, a feat that every project should emulate.’ Peter Rowsome in London Archaeologist 2018

‘… the discussion and presentation are excellent. There is extremely important material here, with some splendid data, making a significant contribution to our understanding of the development of the area.’ Tim Williams in Transactions of the London and Middlesex Archaeological Society 2017 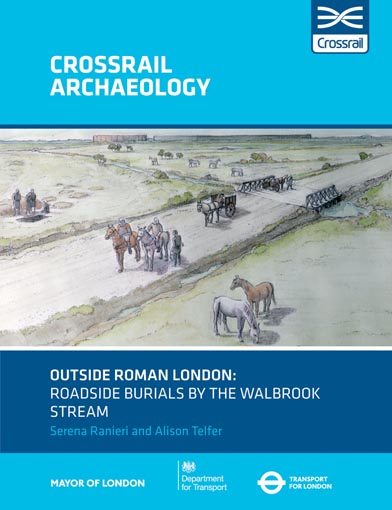