Excavations at Beddington have uncovered a long occupation sequence which includes Late Bronze Age or Early Iron Age fields, a Late Iron Age enclosed settlement and early Roman finds. A villa was established at the site in the late 2nd century AD and included a house, bathhouse and five other buildings, two of which were barns, although there was no direct evidence of crop or livestock production. In the late 3rd century AD wings were added to the house, the bathhouse was modified and the barns were replaced by a large aisled structure. Unlike many other villa sites there is no evidence for continued occupation in the post-Roman to Early Saxon period.

"… the editor and his colleagues should be congratulated on getting to press an interesting and attractive report on these 1980s excavations."
David Rudling in Britannia 2007

"… this report is particularly welcome as an addition to our knowledge of Roman-period sites in Surrey. Isca Howell is to be congratulated on rescuing this important excavation from oblivion."
David Bird in Surrey Archaeology Collections 2005 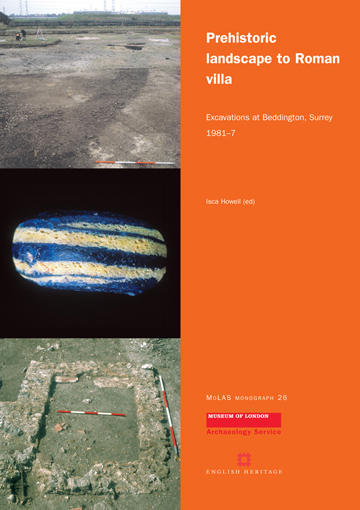