Roman London and the Walbrook stream crossing: excavations at 1 Poultry and vicinity, City of London

1 Poultry proved to be one of the most significant Roman sites ever excavated in the City of London, with an unparalleled sequence of buildings, roads and open spaces. A timber drain of AD 47/8 beneath the main road is the earliest securely dated structure yet known from Londinium, and a pottery shop, destroyed in the Boudican revolt, gives a snapshot of life in AD 60/1. A 2nd-century AD writing tablet preserves the only evidence for the sale of a slave found in Britain to date, while the 3rd- and 4th-century buildings found provide a rare demonstration of the continuities and changes that occurred in Roman urban life.

A full digital resource for the sites excavated at 1 Poultry and in the vicinity is available online via Archaeology Data Service.

... the book is easy to navigate thanks to the narrative style, index and many detailed, well-designed plans. Roman specialists pore over them. They could equally be dipped into by imaginative school teachers or anyone curious about the world of Roman Britain. The archaeology has matched Palumbo’s ambition for1 Poultry.
Mike Pitts in British Archaeology 2012

Future research on its databases and new ideas from excavations in London and elsewhere, including across the Channel, will mean it remains a prime resource for understanding Roman London.
Simon Esmonde Cleary in Transactions of London and Middlesex Archaeology Society 2012

… this definitive account presents a wealth of new material and is essential reading for all with a serious interest in the archaeology of Roman London.
Dominic Perring in Britannia 2013

This report represents one of the most important single contributions to the archaeology of Roman London in recent years.
Mike Fulford in Archaeological Journal 2012

… a tremendous achievement, boosted in no small measure by Louise Rayner’s superb pottery report, with its careful recording, insightful observations and abundant illustrations. Pottery is where it belongs: at the heart of the city.
Edward Biddulph in Journal of Roman Pottery Studies 2015 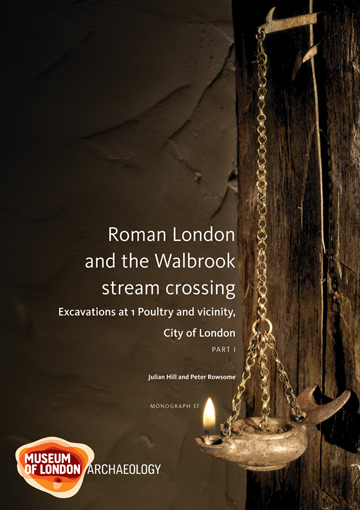