This publication presents research into Britain’s earliest and most significant collection of Roman waxed writing tablets. The collection, which boasts the first hand-written document known from Britain, was discovered during archaeological excavations for Bloomberg. The formal, official, legal and business aspects of life in the first decades of Londinium are revealed, with appearances from slaves, freedmen, traders, soldiers and the judiciary. Aspects of the tablets considered include their manufacture, analysis of the wax applied to their surfaces, their epigraphy and the content of over 80 legible texts.

This is an exemplary publication that makes available the 79 legible texts of the 405 stylus tablets dated to c AD 50-80 found in the Bloomberg excavations in London … Roger Tomlin has compiled a magnificent discussion … all in meticulous detail and accompanied by appendices and specialist indexes … it is marvellous to see this superbly presented book appear so soon after the excavations.
Guy de la Bedoyere in British Archaeology 2016

Painstakingly accurate excavation and recording of the Bloomberg site will further advance the already excellent reputation of the British community of archaeologists …These tablets are indeed remarkable and the beautiful and lavishly illustrated volume produced by the Museum of London Archaeology matches their importance. All in all it is a wondeful achievement.
Alan K Bowman in The Times Literary Supplement 2016 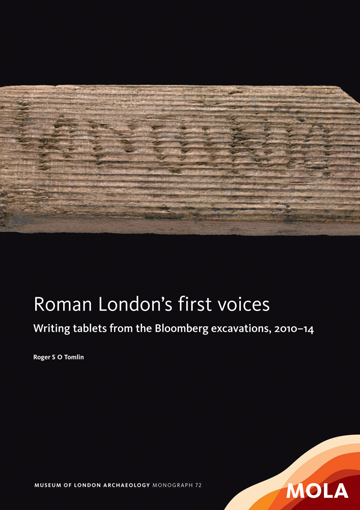