Roman pottery production in the Walbrook valley: excavations at 20–28 Moorgate, City of London, 1998–2000

Important new evidence of London’s 2nd-century AD Roman pottery industry has been found along the western side of a tributary of the Walbrook stream. Up to eight kilns, producing Verulamium region white ware, and a probable potters’ workshop represent two phases of production. The findings indicate that much of the pottery thought to have been produced outside the settlement may come from these kilns. Pottery production went into decline in the second half of the 2nd century AD, though residual evidence was found of nearby glass working and other industries. Later Roman and medieval activity was largely truncated by modern basements.

"Every so often a site comes along that revolutionises our thinking … This excellent volume, supported by beautiful colour illustrations, describes 2nd-century pottery production at Northgate House, Moorgate."
Roberta Tomber in British Archaeology 2006

"The whole book shows the value of integrating all the illustrations into the main text … It is set within an interpretative discussion that incorporates specialist information from technical appendices in an exemplary manner … The presentation of the data and interpretation in an attractive but authoritative book, accessible to specialists and general readers…"
Kevin Greene in Antiquity 2007

"The volume is produced in the standard MoLAS format and includes many colour photographs. The authors have presented the evidence very clearly with all the supporting dating evidence and the finds are meticulously described. The report should be seen as a model for describing a kiln site and the wares and the authors are to be congratulated for their achievement."
Jane Timby in Britannia 2008 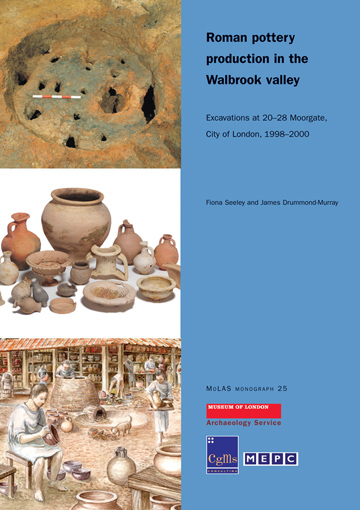