This report presents an overview of Roman urban development in London south of the Thames. The establishment of the Roman bridge and the first approach roads and landing places made Southwark an ideal location for the development of facilities for the trans-shipment of goods between land and river. A wide range of data from 41, previously unpublished, north Southwark sites provides the means for ‘mapping’ Roman activity in Southwark – an early trading settlement and later administrative centre, contracting by the mid 4th century AD to the area around the bridgehead – and documenting changing patterns of land use and broader processes of social and economic change.

"…this book is to be welcomed as a substantial introduction to an important body of information."
David Bird in British Archaeology 2010

"…this is a lavishly presented publication and provides a timely synthesis of excavations in Roman Southwark to date and will no doubt become a valuable source of reference for anyone with an interest in Roman London. The volume presents a wealth of well-researched data in an accessible, attractive and authoritative way and complements a series of recent monographs on aspects of Roman Southwark…"
Victoria Ridgeway in Transactions of the London and Middlesex Archaeological Society 2010

"… this volume is an invaluable contribution towards the study of Roman Southwark and a testimony to the skills and dedication of its major authors and many contributors."
Harvey Sheldon in Britannia 2011 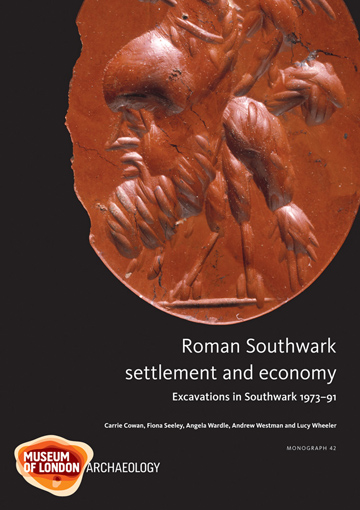