Romano-British round houses to medieval parish: excavations at 10 Gresham Street, City of London, 1999–2002

The process of urbanisation north of the city’s main east–west road (beneath modern Cheapside) in the Roman and again in the medieval period is illustrated by an unusually full archaeological sequence. Round houses, and evidence for glass working in an Iron Age British tradition, in the AD 60s were superseded by timber buildings alongside a new south–north road. The site was reoccupied from the 10th century AD and the remains of masonry buildings and later tenements and taverns were recovered. A fine mosaic in a 2nd-century AD town house and high-quality imported 13th-century glassware are evidence of affluent households in both periods.

While the roundhouses are the undoubted stars, this volume details the whole sequence from Roman to early modern. It represents a major step forward in our understanding of the early Roman city.
Ian Armit in British Archaeology 2015 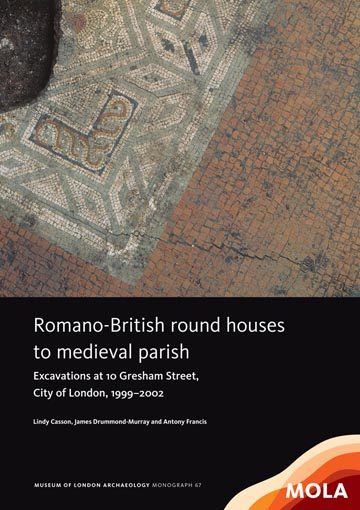