The Rose and the Globe – playhouses of Shakespeare's Bankside, Southwark: excavations 1988–91

Excavations at the sites of two famous playhouses of Tudor London, the Rose and the Globe in Southwark, provided physical evidence for the size, layout and development of these playhouses; they are presented here in detail for the first time in 400 years.The hundreds of individual structural elements, objects and plant and animal remains found are described and, together with the freshly researched documentary sources on Shakespearean theatre, fully integrated into the chronological narratives and thematic discussions of every aspect of the playhouses. This archaeological report aims to integrate all strands of evidence and appeal to a wider audience of those interested in the history and development of the theatre.

Winner of the bi-annual London Archaeological Prize 2010 for the best publication about London's archaeology in the last 2 years.

"…This assembly of voices has the effect of demonstrating the interdisciplinary nature of this project, which involves not only archaeology, but also the analysis of material objects and the interpretation of data for the purposes of creating a historical narrative for these important theatres… Those who are interested in theatre buildings of the late 16th and early 17th centuries will perhaps receive the most benefit from Chapters 5 and 6, which are magisterial in their attention to detail and in providing a quite ‘scientific’ approach to the playhouse structure."
Farah Karim-Cooper in Around the Globe 2010

"Julian Bowsher’s and Pat Miller’s comprehensive report of the excavations of the Rose and Globe theatre sites in the late 1980s, copiously illustrated in colour, make the results of these excavations available to the general readership for the first time."
Ros King in Times Literary Supplement March 2010

"Archaeology is good at revealing the lives of common people, but how much more exciting when it engages with a story like this… This account is much more than an excavation report – for instance, now the dimensions of the theatre have been revealed it has been possible to show how, using simple mathematics, their carpenters laid out the timber frames and thought about sight lines –and will surely come to be a key text in theatre studies. That sort of leap is rarely made by archaeology and it’s exciting to see."
Paul Stamper in British Archaeology 2010

"The Rose and the Globe, then, is a treasure trove of archaeological and documentary information about the ecological and material history of these two Bankside theaters that will shape scholarship and pedagogy, including my own, for a generation. But for me what emerges in this volume as a genuine surprise about these playhouses is the palimpsest-like quality of their eco-material histories."
Vin Nardizzi in Renaissance Quarterly 2010 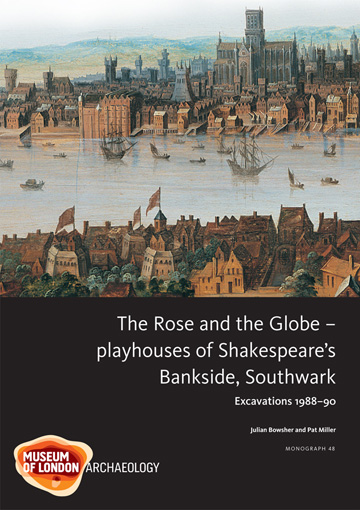