The palace and abbey of Westminster has been the pre-eminent royal, religious and governmental centre in England since the 11th century – home of English monarchs until the reign of Henry VIII and then of the House of Commons. The abbey was a royal church, site of the coronations of all English monarchs since Edward the Confessor and mausoleum for many of England’s royal families. Excavation findings include evidence for the origins of settlement on Thorney Island over 7000 years ago, Roman and Saxon occupation, and the development of the palace up to the fire of 1834. This up-to-date synthesis includes analysis of the environment of the island and integration of antiquarian observations.

"… the volume is attractively produced, well laid out, and in full colour. It is to be welcomed as a useful addition to the archaeology of London."
Warwick Rodwell in Transactions of the London and Middlesex Archaeological Society 2006

"… the individual authors and their parent organizations should be congratulated for this publication and the increased rate of archaeological publications in general in London."
Hedley Swain in Transactions of the London and Middlesex Archaeological Society 2006 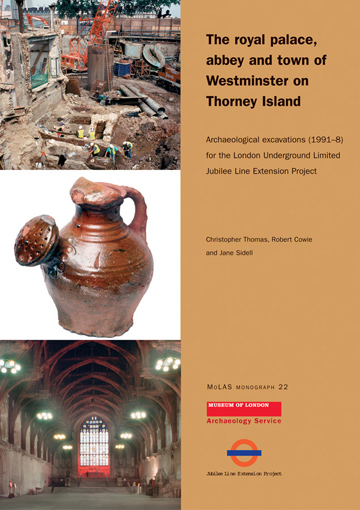