Winchester Palace: excavations at the Southwark residence of the bishops of Winchester

The London house of the medieval bishops of Winchester in Southwark originated in the mid 12th century. Situated adjacent to the Thames and wharves, it developed into a palatial residence based around an inner and outer courtyard and accommodating the bishop, his household and servants. The results of archaeological rescue excavations in 1983–90, mainly in the east part of the site, are supplemented by a wealth of documentary and pictorial evidence, taking the story into the 19th century. Fire in 1814 revealed the surviving medieval masonry of the hall and service range, and the hall’s west gable wall with its rose window is an imposing landmark today.

"The high quality of this monograph series has been much remarked upon. This is another model report: well written, scholarly and yet accessible. Top marks."
Paul Stamper in British Archaeology 2007

"Like previous volumes, this latest addition to the excellent MoLAS monograph series attempts to place specific excavations … within a broader understanding of a discrete urban parcel … This is a worthwhile volume, then: nicely produced and at a very good price, it is an important contribution to our understanding of the development of palatial architecture and demonstrates that London houses of the country’s greatest magnates were as impressive as any they owned."
David Stocker in Transactions of the London and Middlesex Archaeological Society 2007 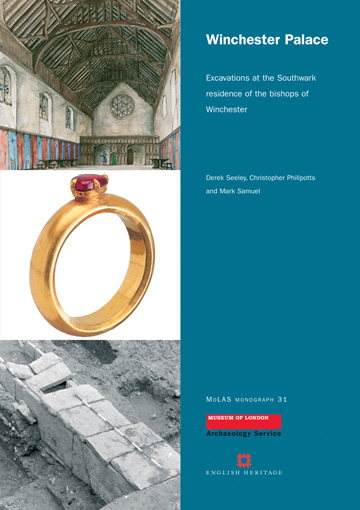