Within these walls: Roman and medieval defences north of Newgate at the Merrill Lynch Financial Centre, City of London

Roman and later activity was recorded north of Newgate, with the Roman defensive wall and a medieval bastion preserved in the new development. Stream channels gave way to early Roman settlement, with the city’s defensive wall built in the late 2nd century AD. The defensive ditch was redug in the Late Saxon period and the Roman wall repaired, with the area becoming the site of the Greyfriars Friary in 1225. The City’s growth saw the ditch built over by the mid 16th century and the friary was suppressed at the Dissolution. By the mid 18th century most of the city wall had been demolished and the Giltspur Street Compter prison was constructed in 1787–91. Later buildings included St Bartholomew’s Hospital and the General Post Office.

"The MLFC report forms part of the MoLAS monograph Series and is presented with clear plans, photographs and illustrations throughout of high quality… The monograph represents good value for money and is recommended to those with an interest in urban defences and their mutation across time. Furthermore, it represents an interesting direction for published archaeological excavation reports – a move away from stuffy, complicated phasing to a more accessible and user-friendly experience…."
Gavin Speed in Medieval Archeology 2008

"Author Jo Lyon is to be congratulated on a well constructed narrative of excavations over a long period…We are getting used to MOLA volumes setting high standards, but this monograph deserves an Olympic Gold for production values… It will remain on my bookshelf for a long time to come."
John Brown in London Archaeologist 2011 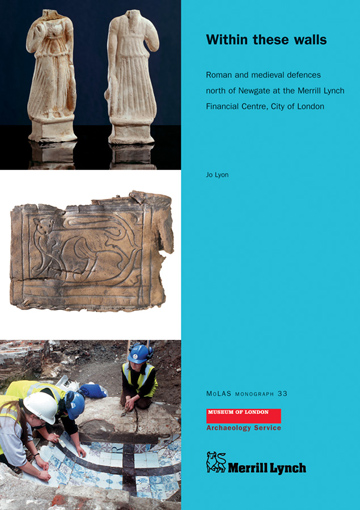