Excavations 1976–90 at the priory of St Mary Merton revealed much about the layout and development of this monastery from the 12th century to the Dissolution. Founded on its present site beside the Wandle river, c 11.3km south-west of London, in 1117, Merton was one of the most influential of all the English houses of regular canons, and was much favoured by Henry III. Of particular interest are the monastic infirmary complex – hall, chapel, cloister and ancillary buildings – and the large number (700+) of burials excavated from the external cemetery, church, cloister and chapter house.

"Previous MOLAS monographs have provided exemplary reports on several monastic houses in and around London, and this latest publication again makes a major contribution, living up to the high standards set by earlier volumes in this series."
James Bond in Medieval Settlement Research 2008

"This books aims to provide an integrated account of the findings of the excavation, putting these in the context of the priory’s documentary history. It achieves its goals with a large measure of success, and in certain areas can be said to have triumphed against the odds."
Nigel Ramsay in Transactions of the London and Middlesex Archaeological Society 2007

"The presentation is of the usual high standard of MoLAS monographs, with good quality colour images and line drawings used throughout and a number of reconstructions to put very useful flesh on the bare bones of robbed-out foundations. Documentary evidence, key finds and analyses of the faunal data are engaged as evidence in every phase… The labour that went into this publication is worn lightly; the fact that this study has been produced under the pressure of developer-led archaeology makes it all the more impressive. The use of architectural stonework in site interpretation is particularly significant, setting a new standard in medieval monastic archaeology."
Deidre O’Sullivan in Medieval Archaeology 2009

"… this is an excellent report… we must be grateful to the bodies that funded this valuable publication and for the devotion and patience of the editors, authors and specialists who have brought it to fruition."
Dennis Turner in Surrey Archaeological Collections 2010 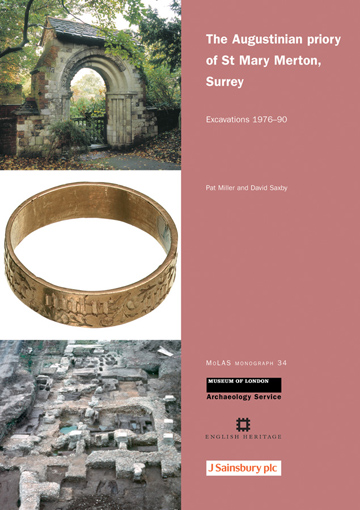