The largest-ever excavation of a naval dockyard revealed storehouses, docks, slipways, cover buildings, mast ponds, a smithy and other structures. These remains are integrated with maps and documents to chart the yard’s development, from its opening in the early 16th century to its closure in 1869. Countless ships – among them the Mary Rose and Golden Hinde – were built, repaired or stored here, and the dockyard saw visits by royalty, including Peter the Great, and many others, notably the 17th-century diarists Samuel Pepys (of the Navy Board) and John Evelyn (whose home was Sayes Court), and the 19th-century engineer John Rennie.

… this book is a valuable pulling together of data, an indispensable source for future histories and, at £30 , extremely good value.
Peter Guillery in Transactions of the London and Middlesex Archaeological Society 2017

The book clearly links the detailed development of the dockyard as a space to the wider forces which shaped it, both the processes of ship-building and naval history in the post-med period. This publication of the excavations of the largest naval dockyard is impressive. The specialist shipbuilding and dockyard operations and activities are clearly presented and illustrated through the use of well-placed plans, historic documents and pictures. A fascinating story.
London Archaeological Prize 2018 Honourable mention 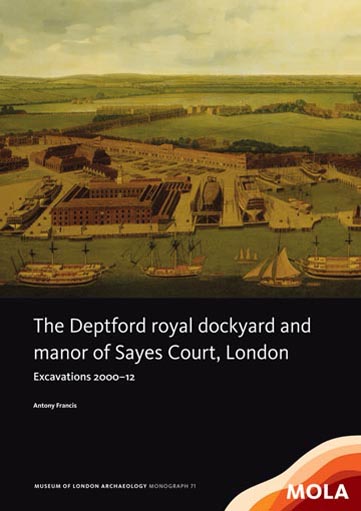