The evolution and exploitation of the Avon flood plain at Bath and the development of the southern suburb: excavations at SouthGate, Bath, 2006–9

The SouthGate site lies between the River Avon and the southern defences of Roman and later Bath. This volume describes the evolution of the local Avon flood plain from the Pleistocene to the 20th century. Highlights include a large Early and Late Mesolithic lithic assemblage, Anglo-Saxon extramural activity, the Norman and later development of the Southgate suburb, and an artificial watercourse which eventually became an open sewer known as the Bum Ditch. Later periods provide glimpses of a low-status area that provided goods, food and services to the more familiar wealthy Georgian city, the ‘Baedeker’ air raids and the Beatles.

The approach taken to the project as a whole is best described as visionary, setting the history and archaeology of Bath in the context of the development of the River Avon over 12 millennia…
This volume is number 68 in the Museum of London (MOLA) monograph series. Collectively, these monographs are a remarkable record of that organisation’s timely publication of archaeological excavations, not often matched elsewhere.
Roger Leech in Antiquity 2015

An efficient, highly professional production by an experienced team, this is a major addition to the historiography of Bath with interesting undigested implications for the topography and intramural city and its defences. There is much here of interest to anyone fond or urban forms and changing fortunes of historic suburbs.
Nigel Baker in Medieval Archaeology 2015 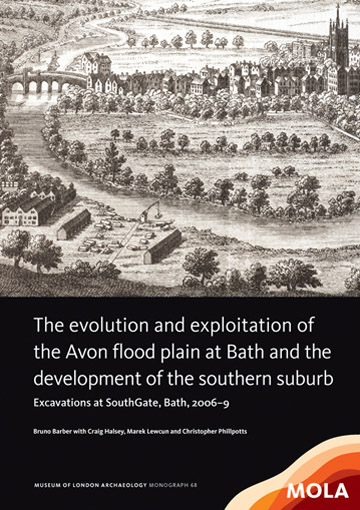