This monograph provides the first detailed overview of the archaeological evidence for the Middle Saxon trading port of Lundenwic, and presents the results of fieldwork at 18 locations on the site of the settlement. The evidence is contextualised in thematic essays on various aspects of the settlement including its origins and development, political and geographical setting, size and layout, food production and consumption, crafts and industry, trade and beliefs and superstition. The volume includes appendices on the artefacts and biological remains, data on a programme of radiocarbon dating designed to address questions about the development of Lundenwic, a gazetteer of sites and an historical timeline for the settlement and its hinterland.

… these keyhole sites together provide a major window onto early London, and the authors and designers of Lundenwic are to be congratulated on mustering the complex evidence of topography , structure, craft and trade with such clarity and coherence. The English might like to clobber their past, but at least they produced a generation of skilled field archaeologists …
David Miles in Minerva 2013

Although those researching Lundenwic will still need to look at the report of the large Royal Opera House excavations (another MOLA monograph, in 2003), this volume forms its much-needed companion, contextualising the settlement through a series of extensive synthetic chapters. While the conclusion defines a number of still unresolved aspects, the study shows how far we have travelled in the last 30 years.
Tim Pestell in British Archaeology 2013

… this is far from just an excavation report: it provides a fascinating study of this internationally important emporium, covering its history, scale, contacts and wider landscape context … Overall,, this is a hugely important report: the authors, and English Heritage , are to be congratulated for bringing these excavations to publication and contextualising them so well.
Stephen Rippon in Medieval Archaeology 2013

The authors are to be congratulated on a fascinating synthesis of the rich archaeological data, which provides a very readable and richly detailed account of Lundenwic, as we can now at last begin to see it.
Leslie Webster in London Topographical Society Newsletter 2014

Further examination of the peaks and troughs in the settlement is one of the major research questions for the future; that they can even be asked is a measure of the progress made by the authors and others in the last thirty years, to which this book is a well-written and illustrated testimony.
David A Hinton in Transactions of London and Middlesex Archaeology Society 2013

The book can be enjoyed both by the general reader interested in London’s past and as an important academic study of Middle Saxon archaeology. It certainly deserves a place in students’ reading list if their courses include urbanisation or period themes.
Chris Jarrett in London Archaeologist 2015

… the book is a triumph, because all the strands of evidence are woven together, by multiple authors, to produce a proper synthesis in a sure-footed search for meaning.
…This is a model work of synthesis that shows how full use of the evidence can enable the construction of a detailed and thoughtful interpretation.
Duncan Brown in Medieval Ceramics 2013 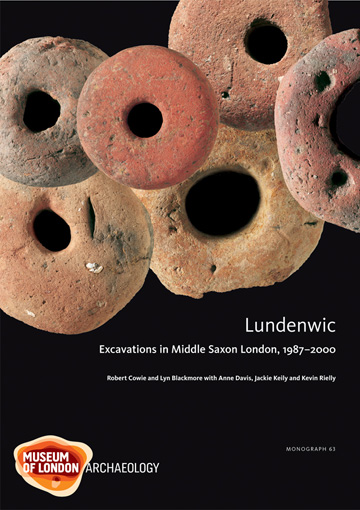