This volume of the Spitalfields series covers the period from the closure of the medieval priory of St Mary Spital in the 1530s to the 19th century and reconnects the archaeological assemblages with documentary evidence in order to describe the early modern suburb, its people and their possessions. From the private mansions and artillery ground of the 16th century to London’s first terraced houses in the 1680s, and on to Spitalfields Market and the silk industry of the 18th and 19th centuries, the household economies and leisure activities of the residents are revealed, notably by the items discarded in their cesspits!

The Spitalfields series includes: A bio-archaeological study of medieval burials on the site (MOLA Monograph 60, 2012); The medieval priory and hospital of St Mary Spital and the Bishopsgate suburb (MOLA Monograph 59, 2019); In the northern cemetery of Roman London (MOLA Monograph 58, 2020).

Altogether a rigorous archaeological and historical survey, with many fascinating insights into the growth and development of a less well-known part of Spitalfields.
Rosemary Weinstein in London Topographical Society Newsletter 2016

Over the last decade and more [MOLA's] impressive output of volumes has been unequalled in Britain. This volume is of international importance. It is difficult to think of any piece of post-medieval urban archaeology conducted on such a grand scale, and published to such a high professional standard, anywhere on earth.
John Allan in Transactions London and Middlesex Archaeological Society 2016

… a series of fascinating insights into the lives of Spitalfields inhabitants and their changing worlds in this vibrant part of London.
Harold Mytum in British Archaeology 2016 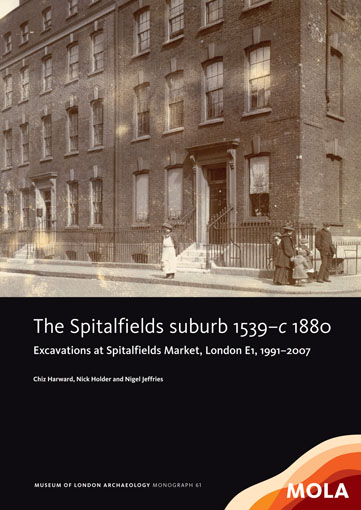